Back
8 ways to prevent dryer fires
March 29, 2017
2 minutes
Facebook Linkedin email
Extrait
Clothes dryers were the cause of 592 house fires in Quebec between 2011 and 2015 (2% of fires reported by municipalities).

The latest numbers on dryer fires

In the States, clothes dryers caused 15,520 fires and $192 million in property damage in 2010. In 32% of cases, the fire was attributed to excessive lint buildup and poor maintenance of the dryer duct.

How to prevent them

1. Empty and clean the lint trap

Remove the lint from the lint trap before and after each time you use the dryer.

Clean the lint trap every 6 months with a brush and soapy water. Not only will you reduce the risk of fire but your clothes will dry more quickly.

2. Opt for metal rather than plastic ducts

Make sure the duct and vent are in good condition.

If they’re made of white plastic, replace them for safety reasons.

To vent the hot air better, install a rigid metal duct; the shorter and straighter the better.

Insulate the duct if it passes through an unheated area like an unfinished basement for instance. This will reduce condensation and the accumulation of lint.

3. Don’t leave the dryer running unattended or without a lint trap

Don’t rely entirely on moisture or temperature sensors or thermometers.

Never use the dryer without the lint trap as this can increase the risk of fire.

Check and clean the ducts Inspect the hot air duct between the dryer and the vent. 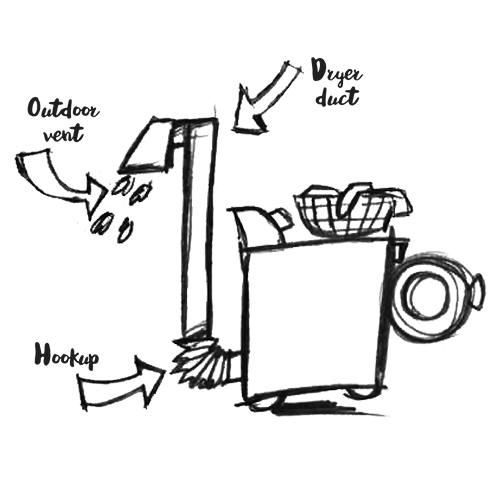 Inspect the hot air duct between the dryer and the vent.

To prevent overheating, check that:

Call on a specialized company to have the dryer ducts cleaned or you can do it yourself with a rag tied to a stick or broom handle.

You know that favourite polyester Saturday Night Fever shirt? Or the dish towel soaked with oil from the fryer? Artificial fabrics or articles laden with flammable liquids like linseed, massage oils, solvents, paint thinners and gas can spontaneously combust.

Hang these items up to dry instead.

6. Go easy on the fabric softener

Adding extra softener sheets do not your clothes super soft make. Instead follow the recommended quantities on the box as these sheets leave a residue on the lint trap that keeps the air from circulating properly.

A dry that is too full (more than ¾ can cause overheating). Make two loads and cut down on drying time.

8. Make sure there is enough clearance around the dryer

Dryers can overheat when they are in stuffy closets or closed spaces.

Do you have any tips to help prevent clothes dryer fires? Don’t hesitate to send them in to us!

You are now subscribed.